“Who else was gonna love me?…” – Mary Jones, Precious

I’ve written about it in my blog before, but I’ll say it again. I absolutely love Mo’Nique’s performance as Mary Jones in “Precious: Based on the Novel ‘Push’ by Sapphire”. Her rant scene is just amazing. My website is probably one of the few that has the full transcript of the rant posted on it, cuz people seem to keep finding it on Google searches and stuff. There’s apparently one Brazilian dude/chick who loves the rant so much that he/she visits my page every other day. To my Brazilian friend: Olá, meu amigo! Te amo!

My other favorite scene from “Precious” is when Mary finally admits to Miss Weiss, portrayed by the incomparable Mariah Carey, my musical Mother Dearest, that she has been abusing Precious. Mo’Nique is so vulnerable in this scene that you can’t help finding yourself feel compassionate towards her. You end up understanding why she has been so evil towards Precious. Clearly she is mentally ill, and clearly she too has suffered from what has happened to her and her child. Sadly though she didn’t see any other way to deal with her boyfriend’s abuse other than to shut up and let things happen the way they did, then abuse Precious even further.

Here’s the video of the scene at the welfare office where Mary Jones breaks down. You’ll have to click on the image to view the video, cuz the person who uploaded it disabled embedding. Below the video is the transcript. Prepare for a good, long cry… 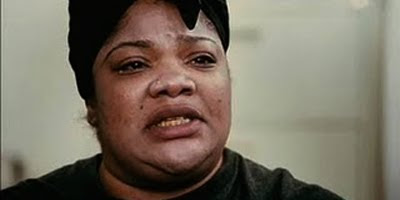 The Oscar was well-deserved. Congrats, Mo’Nique!

Surrending to the Universe…